Where do futons come from? What types are available and how to choose which one is right for you? Before you decide get the correct facts.

The word "futon" is the English spelling of the Japanese word which describes their bedding system. This system includes the "shikibuton" (floor cushion) on which a person sleeps and the "kakebuton" (duvet/comforter) which covers the sleeping person. The floor mat (shikibuton) is the part of the system which has been transformed into the American futon mattress/sofa-bed concept. 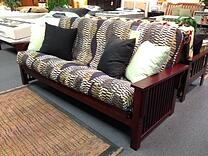 The American version of the futon mattress started out on the floor. As time passed many futon makers began to see the potential of the futon frame as a new design alternative to the conventional, dual-purpose sofa-bed. Although a multitude of futon frames now exist, in the futon industry's early days it was the team of Irv Wieder (of Arise) and William Brouwer who developed the first convertible futon frames. Brouwer won the 1983 Daphne Award (sponsored by the Hardwood Institute) for his Brouwer Bed as the best new design in the Bedroom/Retail Category. Two frames were introduced to work with the futon mattress; the bi-fold and tri-fold futon frames.

There are two major differences between the bi-fold and tri-fold frame types. The first difference is the number of times the futon mattress must fold when converting from the sitting to sleeping position. The tri-fold requires the futon mattress to be folded twice while the bi-fold requires that the mattress fold only once. The second major difference between the two frame designs is that the tri-fold utilizes the shorter "width" of the mattress for seating while the bi-fold utilizes the longer "length". This gives the inherent advantage to the bi-fold because it looks much more like a conventional sofa-bed than does the tri-fold. It also provides a larger seating area for you and your guests. 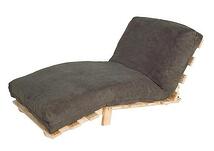 The bi-fold is now the industry standard and the more popular of the two basic styles. The frames are made of wood, metal or a combination of both. The wood choices available include pine, all hardwoods like rubber wood and various others. There are numerous finishes available from natural to cherry to antique finishes. If there is a furniture finish you are trying to match there is a futon frame for you. Frames can even be upholstered in your choice of fabric on the mattress

The arm designs have the looks and design characteristics found in traditional furniture. Today it is hard to distinguish between the looks of a conventional sofa and a futon. The futon also has a great advantage over its counter part, the sofa bed, in that the mattress is much more comfortable to sit and sleep on. It's also a regular size bed when it's in bed position. Futon frames can be unfolded from the front or the side. It takes only seconds to convert from a sofa to a bed.

Futon Frames come in a wide variety of sizes. The most popular size is the full size frame. This frame is designed to use a full size mattress (75” by 54”). Other sizes include queen, loveseat, twin and chair. You will need an ottoman when in open bed position to use as a chair, loveseat, or twin bed.

Sold At Futon Stores But Not Really A Futon

As futon frames have become more and more a part of traditional furniture, new innovations have been introduced to the market. A klick klack sofa does open into a bed but doesn't have component parts and is not a futon. For the bedroom there is a platform bed, sleek design, modern and simple. It can take a futon or convention mattress but it doesn't fold like a futon.

Futon frames are easily delivered into the smallest of rooms. Detailed instructions allow quick assembly. It also allows you to move easily. Instead of moving a heavy sofa sleeper you can quickly disassemble the frame and move to another room or home and reassemble.

An FAI retailer is a specialist in the futon business, find one in your area and give them a call to find out more. Below you can find industry terminology that may be helpful as you shop for your furniture.

The following definitions are the commonly accepted terminology associated with the futon furniture and sofa-bed industry.

Decks:
Decks are the platforms on which the futon rests for both convertible futon sofa-bed frames and stationary platform beds.

Seat Deck:
The seat deck is the deck on which the user sits when a futon sofa-bed is in the sitting position.

Back Deck:
The back deck is the deck which the user leans back on when a futon sofa-bed is in the sitting position.

Tri-fold:
A convertible futon sofa-bed frame that utilizes three decks. The futon mattress can hang over the back of the frame, be folded under itself on the seat deck, or lay flat as a chaise lounge style seat. The tri-fold allows the futon mattress to fold twice along its usually shorter width.

Bi-fold:
A convertible futon sofa-bed frame that utilizes two decks. The bi-fold allows the futon mattress to fold once along its seat.

Wall-Hugger:
A wall-hugger is a frame that can open to a sofa-bed without moving the base of the frame away from the wall. It can be placed directly against the wall and still not touch the wall when converting. They tend to abe more expensive due to the mechanics.

Deciding Which One Is For Your

Take your room dimensions before deciding the size that will fit. Think about what other colors and furniture you be using in you room. What is the major use of your futon and who will be using. We find that our customers that bring this knowledge with them make the easiest and best decisions when buying a futon.