Memphis, TN - J. Russell  bought his futon as a freshman at the University of Memphis in 1996. "I remember it like it was yesterday, walking into The Futon Store on Poplar. It was love at first sight", said Russell nostalgically. His bright red cover gave the right punch to his unfinished frame. Russell recalls how 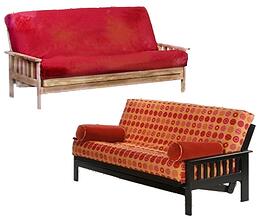 uncomfortable the dorm beds were, which led him to purchase his futon. "The futon mattress has springs in it, and I remember thinking it feels better than the mattress my parents spent a small fortune on," recalls Russell.

He spent 5 years at the University of Memphis toting his most cherished possession from the dorms to his first apartment. After graduating, he went on to a string of entry level jobs and several apartments. “At this point, the only stability in my life was my trusty futon”, said Russell.

In 2005, Russell landed his dream job working in IT at a well-known local company. After spending some time at the company, he moved into a nicer, larger apartment. After learning of the platform beds and memory foam mattresses, Russell again visited The Futon Store to furnish his new apartment. He used his dependable futon in his home office, now for guests to sleep on. In 2008, Russell met and fell madly in love with his future wife, Annie. They are now engaged to be married in October of 2011, and purchasing a home in Arlington.

After Annie informed him that the futon should be gone when she gets back from a week long business trip, Russell and some friends came to visit The Futon Store, then Lowe’s hardware. “Over the years the futon has picked up a stain or two, and Annie wants me to throw it out. But every stain is just another memory we’ve shared together”, he says. With a new cover, a couple of pillows, some stain and a little elbow grease, Russell transforms his old, dingy futon into a modern, fun one that Annie barely recognized. “The whole project cost about $150, which pales in comparison to what it’s worth,” says Russell pleased with his accomplishment. Annie is incredibly pleased with their new futon makeover, and he is relieved that he will have several more years to bond with his old friend.